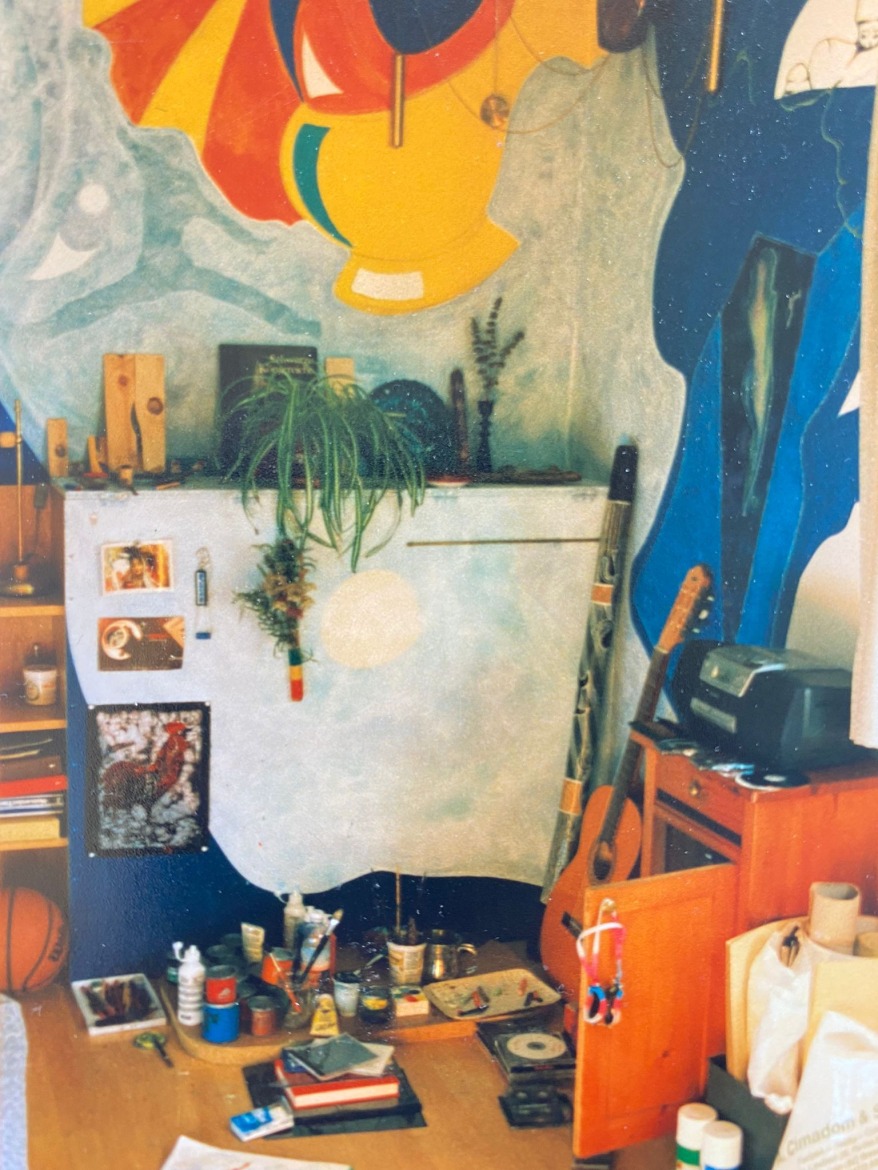 The first time I visited Sharif’s studio I couldn’t see any works of art. Suddenly, they began to appear everywhere. He pointed towards the blinds that filtered natural light, they were full of drawings and marks. The cloth draped over the studio couch turned out to be a painted textile with the motif of a tiger. The couch on which it lay was, in reality, a hand-made object made from reclaimed wood. The carpet on the ground was a collaboration with his son of painted purple flowers populating a floor-bound garden. Here is an artist who lives with material as vital energy. The work of Abdul Sharif Oluwafemi Baruwa is more than separate pieces of art coming together in a gallery – his work is a material philosophy.

It follows a non-linear archive of thoughts, influences, and aspirations. The re-usability of matter as personal archive is something characteristic of his work. An image of his teenage bedroom references back to the youthful source of his ideas. It signals a moment in life of growth, fragility, and uncertainty. Our teenage years define who we are through the development of more complex identities that we develop rather than inherit. In the photograph of his bedroom, painting materials litter the floor next to basketball paraphernalia, revealing his top two career aspirations.

Sharif notices traces of orientalism and othering all around Vienna. The Zebra logo on his tubs of wall paint – the Julius Meinl logo shows a young Ottoman in a red fez. It is the everydayness of these materials.

In 2003, Sharif attended the Venice Biennale and began painting public benches across the city. It was an action done as a painter, but also as a performance in which action and material inherently play on silent postcolonial discussions. There, he met with the artist Július Koller – someone who had already been influential to his work and now became even more so. The relationship developed by Koller between individuals and society performed through various rules and operations as well as the attitude of positive change and anti-hierarchical structures follows through in Sharif’s work when he looks for slippages in the designed city.

The basketball somehow made its way back into Sharif’s artistic practice. Curator Jeanette Pacher invited him to contribute a birdhouse for Claudia Märzendorfer’s project For the Birds, an outdoor sculpture project for the garden of a psychiatric hospital. he ended up using a deflated basketball as the starting point for the new commissioned work.

“Pee Flowers” or the natural trickles of urination that follow gravity across the floor to wherever it leads the yellow liquid. Like a shadow. These unintended patterns adorn Vienna and leave a bodily trace and an unlikely social interaction. This focus on materiality as mark, and on viewing the unviewable is characteristic in the artist’s practice.

Accessible materials like toilet paper, cardboard, and beetroot juice are also ingredients in his papier-mâché forms stuck onto chicken wire. These poor materials coat the city and exist in our homes as well as the bloodstream of the city’s living organs. In Sharif‘s scenography we are given a transparent glimpse into an animated world of personal imagination.

Abdul Sharif Oluwafemi Baruwa, born 1975 in London, lives and works in Vienna. Recent exhibitions include Land, property and commons, curated by Hedwig Saxenhuber at outdoor spaces across Semmering, Austria in 2021 as well as the Artist in residence at Fogo Island Arts in 2019. Baruwa’s most recent solo exhibition in Vienna was held at →Neuer Wiener Kunstverein in 2021. The artist is currently also on view as part of the exhibition →Hier und Jetzt.