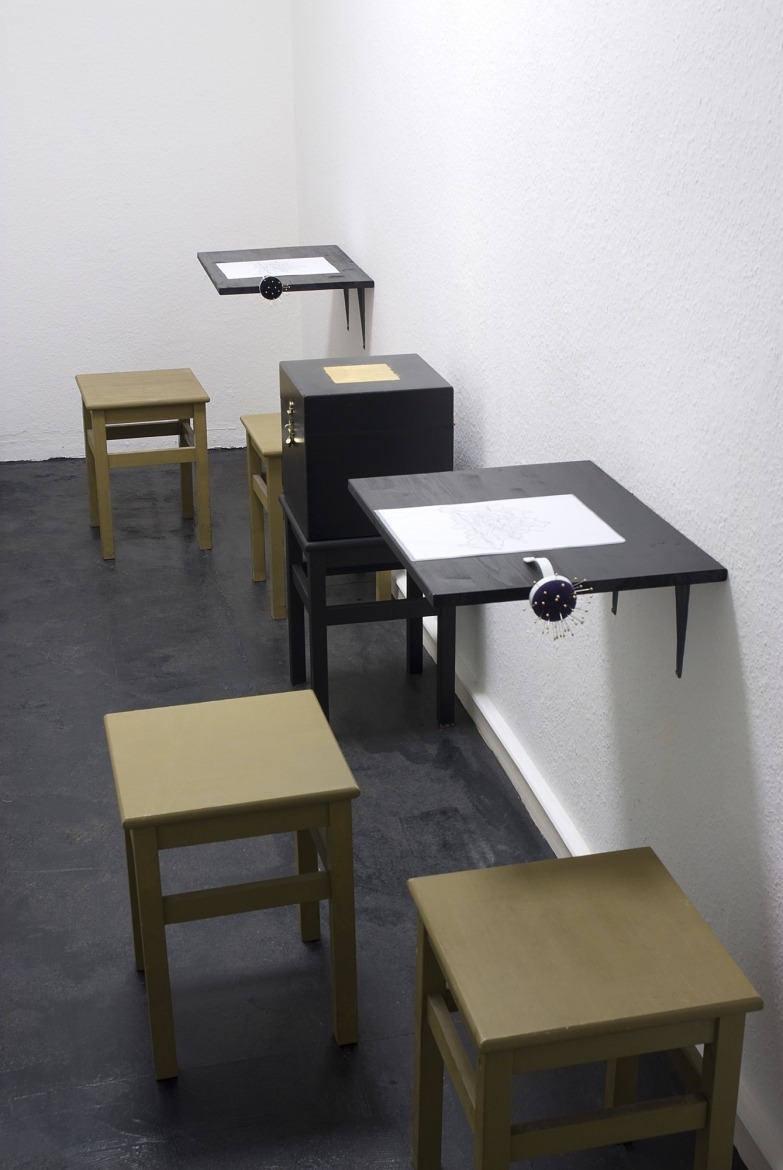 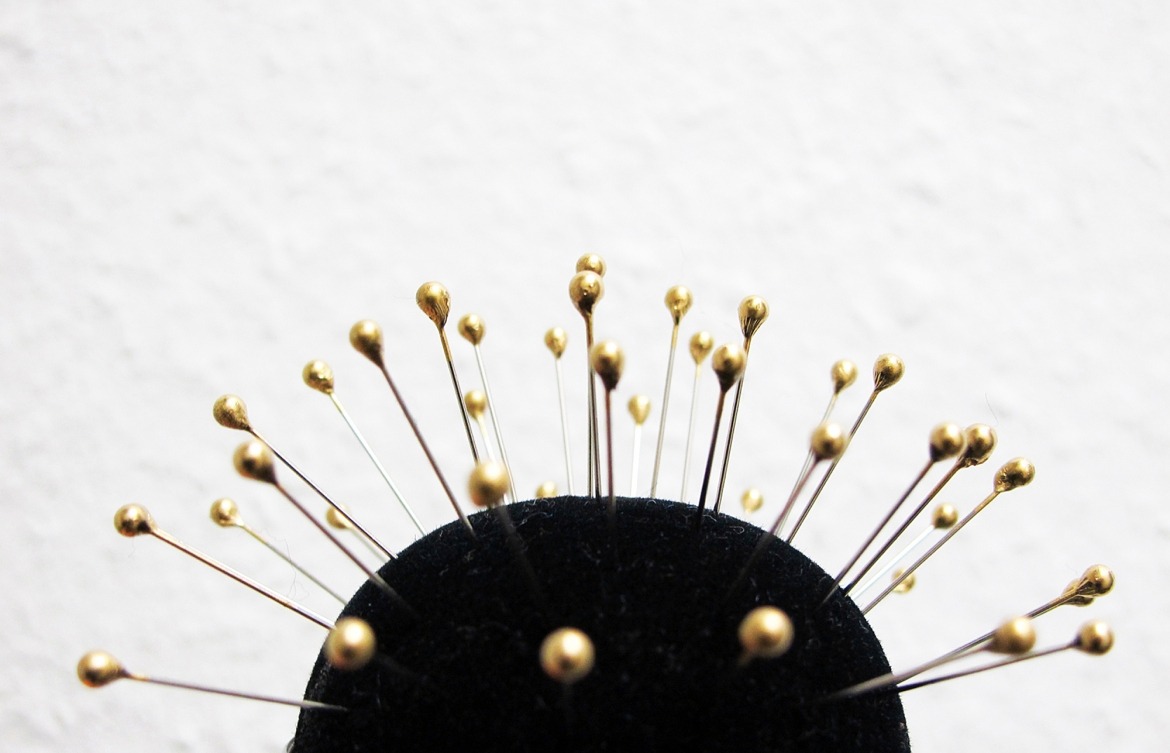 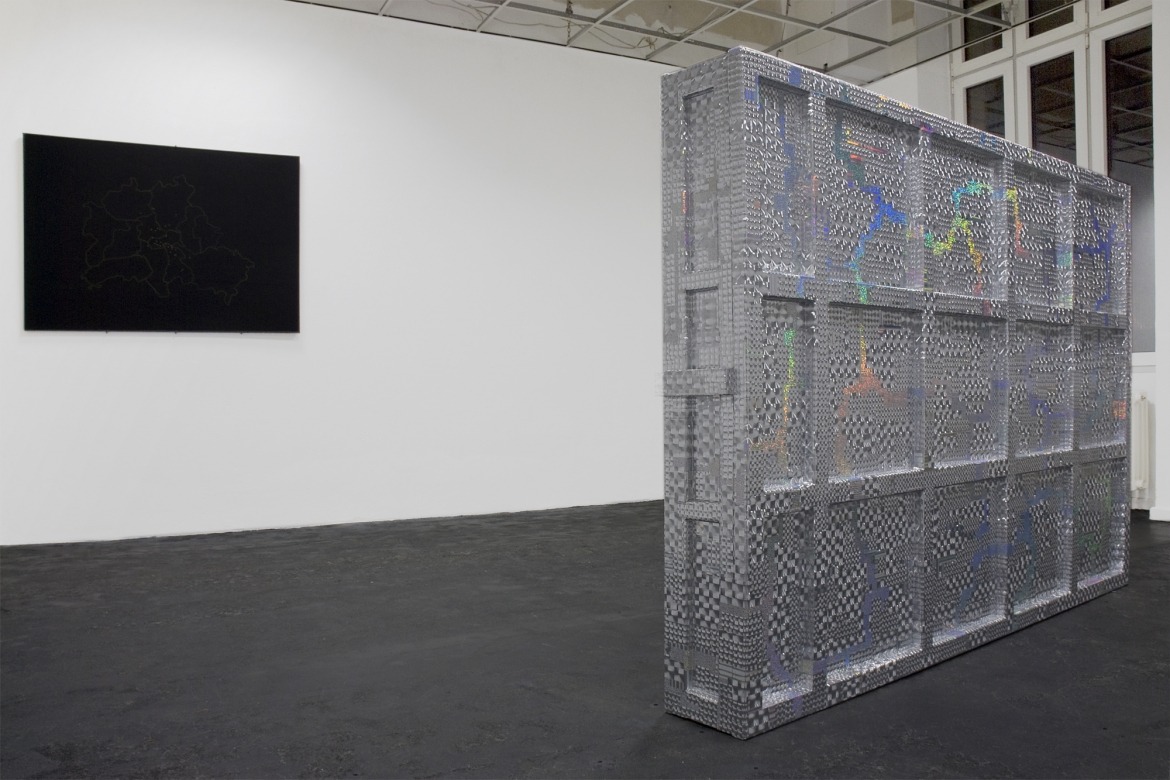 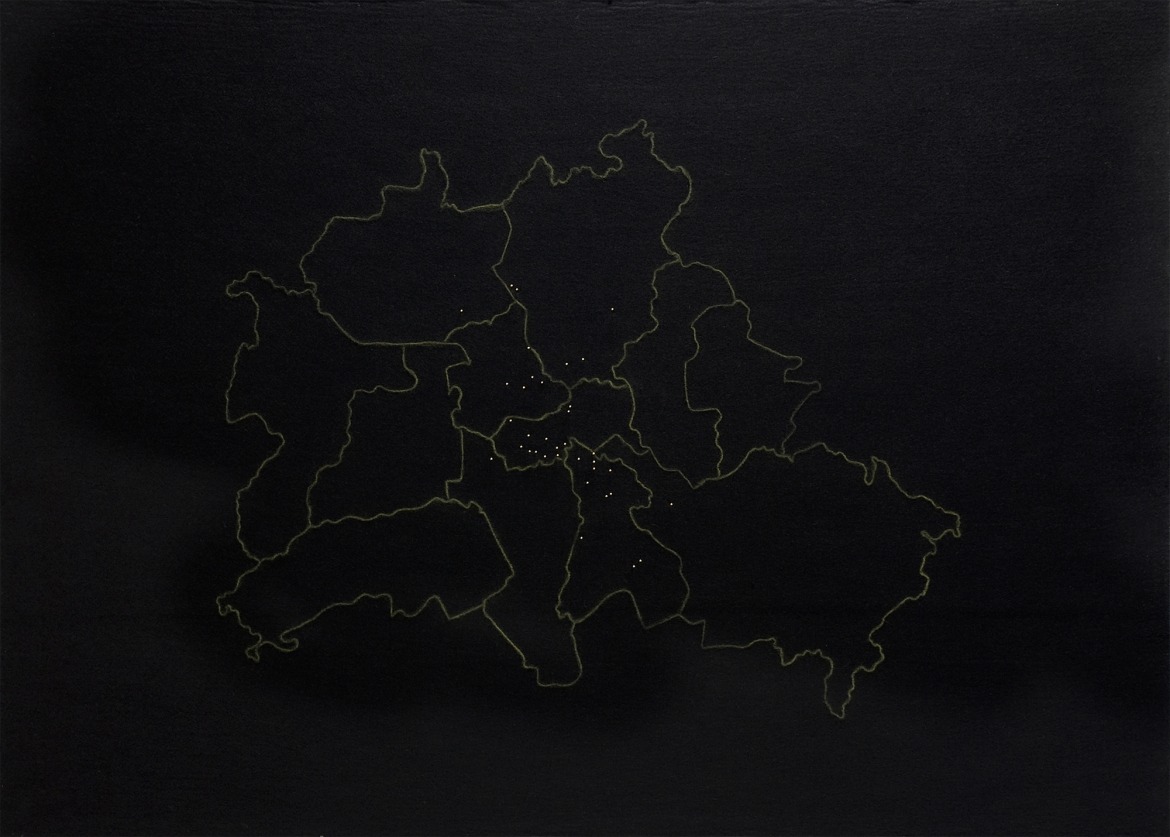 Ze Coeupel: Berlin Constellation, 2012. Foam, wood and felt with gold-color pastel and golden pins, each representing a participating artist in the Census, 101 x 141 cm (Status: May 20, 2012) 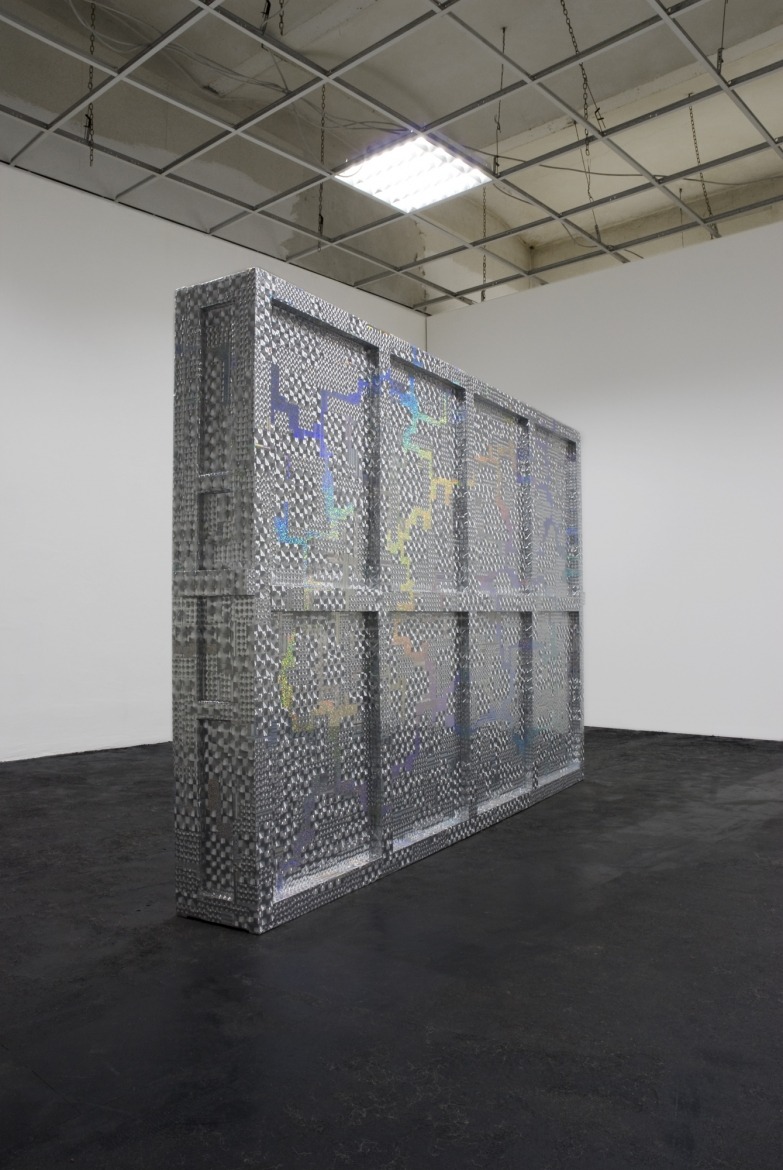 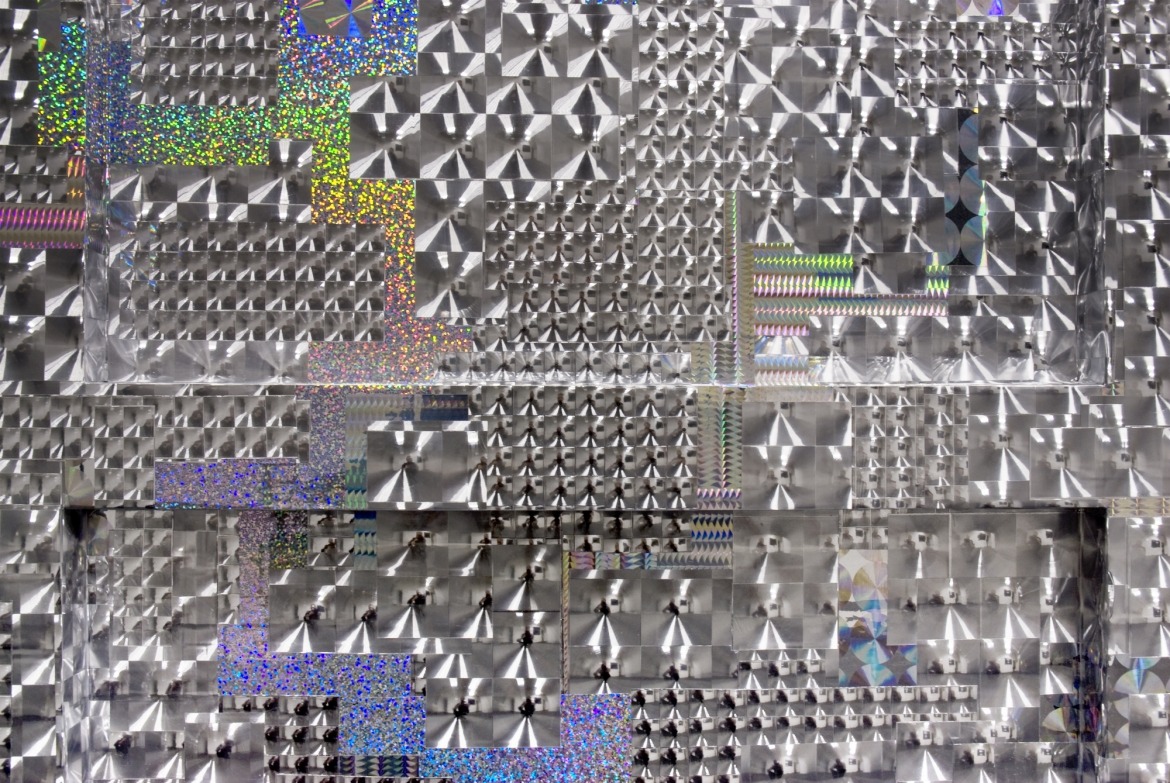 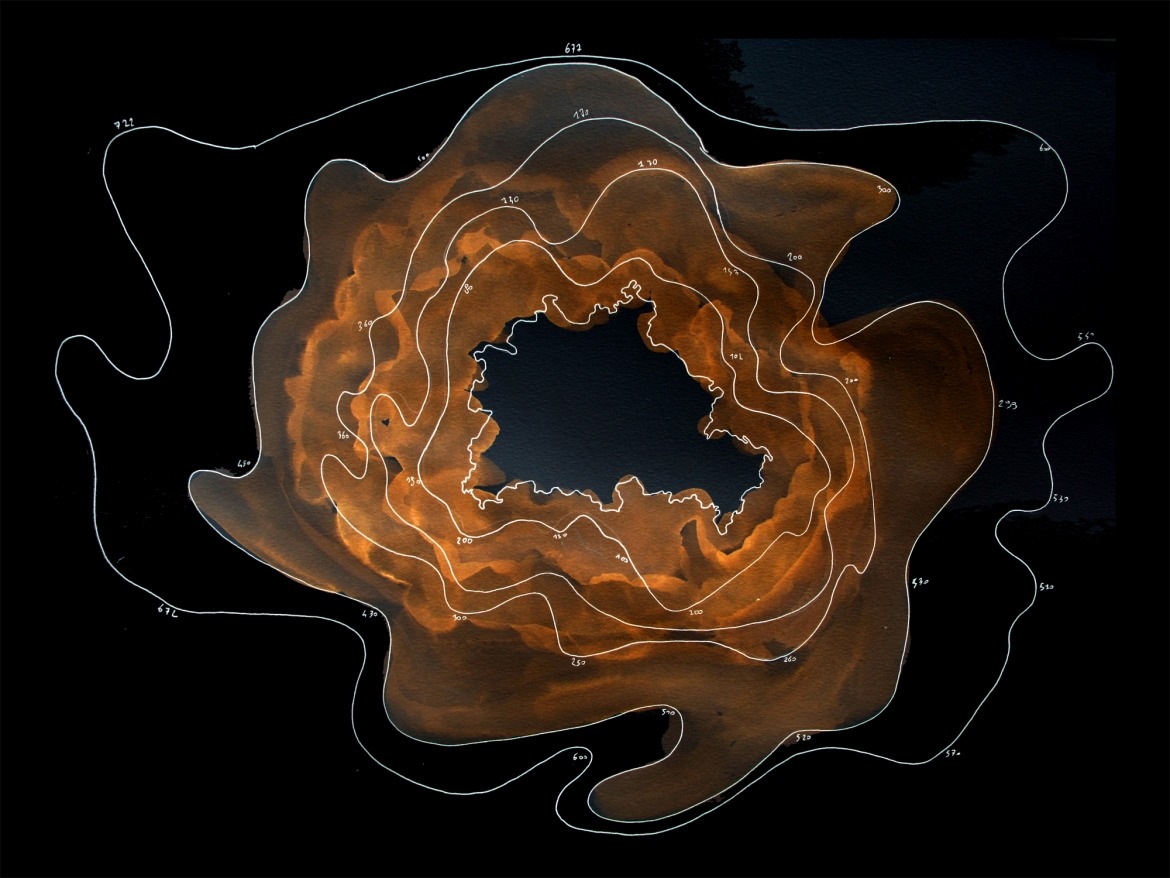 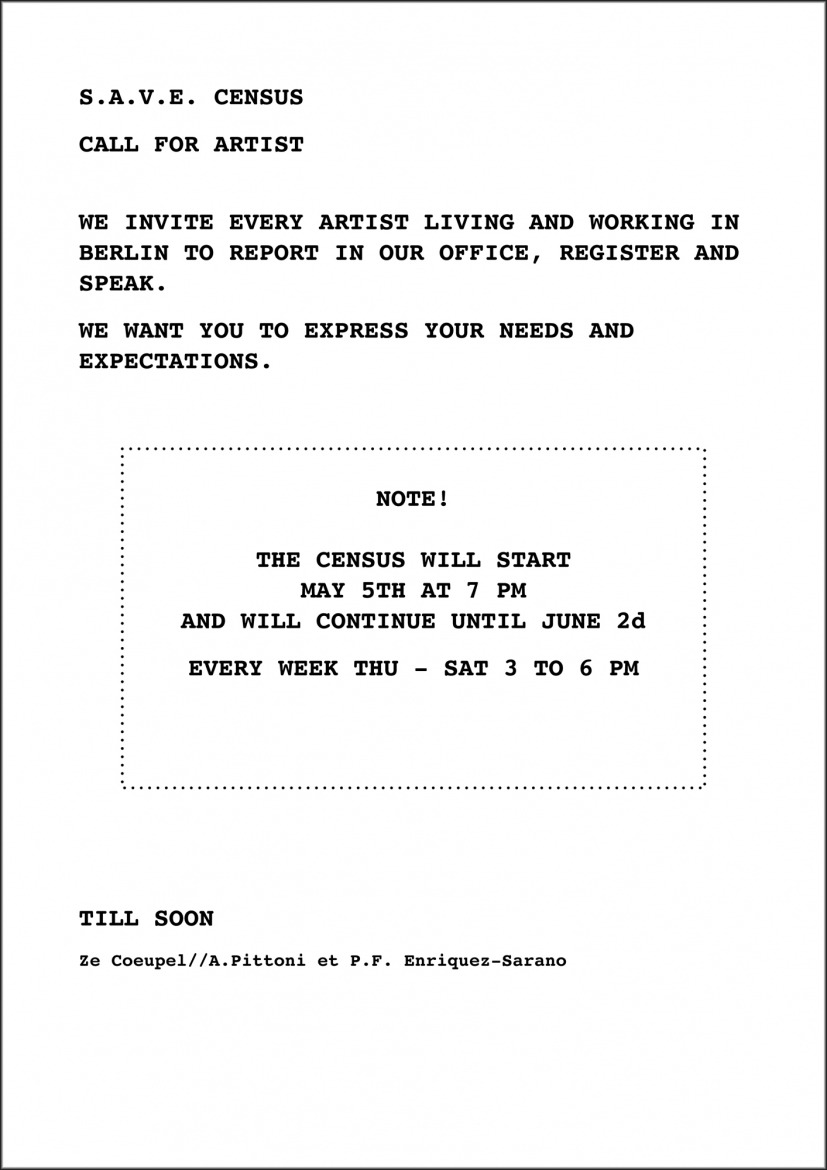 With the exhibition entitled 2012, EXILE wants to actively focus and involve itself in the debate on the current situation of the arts in Berlin. In times of particularly drastic changes within Berlin and an increasingly confrontational debate about the importance and integration of the very artistic foundation of Berlin, EXILE wants to provide a forum in which discussion about these issues is openly encouraged.

Substantial reductions of public and private sales and funding opportunities raise questions of the role of the artist as well as the exhibition space for the identity and branding of the city itself. How is the diverse artistic community, as still existent in Berlin, affected by such developments? What effects do decreasing opportunities and growing commercial pressure have on the diversity of Berlin’s artistic demographics?

The two artists’ positions presented in this exhibition can both, in their own distinct ways, be read in relation to the idea of the exhibition and provide entry points to stimulate a dialogue about the current situation for the arts.

Goran Tomcic’s single work in the exhibition is based on a regular high-end art transport crate, previously used to transport and protect an anonymous painting. Tomcic completely transforms the crate’s wooden surface with multiple layers of silver holographic patterns, resulting in a shiny reflective surface that reflects the viewer back into the space itself. The function of the crate is turned inside out. One of the most mundane objects of the exclusive globalized high-end art is turned into a hollow, though shimmering, jewel. Its form becomes its content and its lack of purpose its purpose itself.

Standing by itself within the gallery space, Tomcic’s work resembles an almost religiously ethereal experience. When being confronted with the crate the associations can range from the Kaaba in Mecca to the monolith in Stanley Kubrik’s 2001. Its mundane character becomes its seduction which again becomes its own alienation; one of the most common signifiers of high-end art becomes a symbol for the deepening ruptures felt within the different parts of the creative community.

In 2009, the artists Ambra Pittoni and Paul-Flavien Enriquez-Sarano, working under the Synonym Ze Coeupel, created the performance entitled S.A.V.E.. Functioning as a self-proclaimed ‘investigation agency’, S.A.V.E. takes residence at EXILE for the duration of the exhibition 2012.

Taking place from 3 to 6 PM during gallery opening hours artists living and working in Berlin are invited to report in S.A.V.E. office inside the gallery to take part in the Census.

Each participant’s questionnaire helps to investigates further into the current state of the artistic community in Berlin. The collected data is turned into an accessible archive as well as into demographic mapping visuals. The results of the census will be constantly updated and visible in the S.A.V.E. office inside the gallery.

With the exhibition’s title, simultaneously apocalyptic yet mundane, EXILE wants to engage itself, as a commercially operating gallery, into the discussion and provide a platform upon which everyone is invited to participate.

Ze Coeupel: Berlin Constellation, 2012. Foam, wood and felt with gold-color pastel and golden pins, each representing a participating artist in the Census, 101 x 141 cm (Status: May 20, 2012)